How Tivo Changed My Life

In case you're not familiar with Tivo, let me introduce you: Tivo.com As you may know, with TiVo or any other (yet inferior) DVR, you can easily record programs from your television, cable or satellite. Plus you can pause live television as well as recorded programs. Yes, live television. Bathroom break? No worries. Doorbell? Fear not. Phone call from your ex? Well, it can't solve all problems.

Another great feature of TiVo is its ability to anticipate your television watching needs. If you let it, TiVo can actually record programs for you that it thinks you will enjoy. Not only that, but you can tell TiVo to record all the episodes of, say, America's Next Top Model, and it will do so. Never again will you have to worry about missing a judgmental look or sentimental yet somehow self-aggrandizing anecdote from Tyra Banks. Basically, TiVo is powerful medicine. 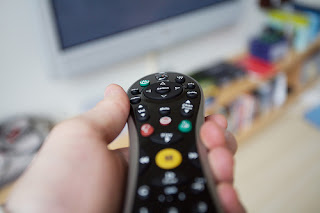 More important than TiVo's technical abilities is its influence on one's perception of all other media. I'm in my car and I want to rewind the radio. I'm watching a film at a theater and I want to pause the movie to go get some Milk Duds. I'm at other people's home who do not have TiVo and want all TiVo's offerings (and secretly scoff at my friends' 20th century viewing habits). Frankly, I want to TiVo the world.

Currently on my TiVo "Now Playing List":
Charlie Rose (it's recording this as I type. Ted Koppel is on tonight.)
Family Guy
Futurama
The Colbert Report
Desperate Housewives
Everyday Italian (Ah, Giada, when will you cook for me?)
The Daily Show
60 Minutes (They did a story on Ecoterrorists that I wanted to watch)
Kathy Griffin . . . Is Not Nicole Kidman (B-List? She's the tops for me)
Battlestar Galactica (quite simply, one of the best shows on television. This is the new version.)
24 (I never watched this before, but there was a marathon, so I recorded a season)
Forbidden Planet (classic sci-fi movie)
Insomniac Music Theater (just one video from Howie Day)
Star Trek: The Next Generation (yes, I like my SciFi!)
In America (recorded but I still haven't watched it)
The Alternative (videos from the 80s and 90s)
Party Girl (Hey, hey, helloooo)
Mindwalk (Mont St. Michel and physics. What's not to love?)
Far From Heaven (another movie I recorded and need to watch)
The Hours
Seinfeld (two really good episodes)
South Park (the one with Jennifer Lopez)

And that's it for now. It's a glimpse, I fear, into my psyche. Don't judge me too harshly.
Email Post
Labels: myspace blog