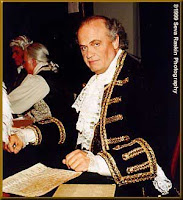 Former Tennessee Sen. Fred Thompson said today he was certain former Iraqi leader Saddam Hussein had weapons of mass destruction prior to the 2003 U.S.-led invasion of Iraq, a point of contention in the 4.5 years since the war began.

"We can't forget the fact that although at a particular point in time we never found any WMD down there, he clearly had had WMD. He clearly had had the beginnings of a nuclear program," the former Tennessee senator told an audience of about 60 at a Newton cafe.

The question of whether Saddam had banned chemical and biological weapons, and plans to acquire nuclear weapons, has been the subject of intense debate in light of inspectors' failure to find such evidence since the war began.

Thompson made the statement while explaining why he felt the war was justified, despite the Bush administration's chief justification for the invasion turning out not to be verifiable.

Thanks to HuffPo for the story.
Email Post
Labels: the republicans embrace change and reject reality