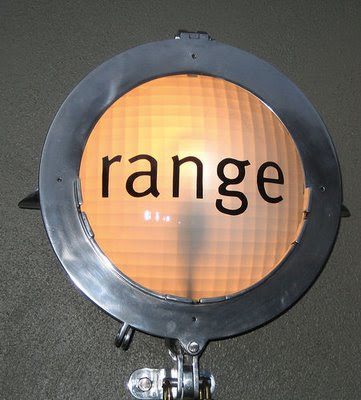 Hamartia (from the ancient Greek) is used in Aristotle's Poetics, where it is usually translated as a mistake, flaw, failure, fault, or sin.

[Greek, from hamartanein, to miss the mark, err.]

Range missed the mark for me last night, and I SOOO wanted it to be great. It was good, just not great. Too many things were just slightly wrong to get the big 5-star rating.

Having said that, here's how it all went down. I made reservations a couple weeks ago for the BF's birthday dinner. We arrived on time and were promptly seated. Points for that.

Very shortly after sitting down, our waiter asked what we would like to drink. Seeing as how we were sharing the one and only drink menu on the table, we hadn't really had time to make our way through everything, let alone make a decision. I humorously pointed this out to the waiter who, in all fairness, offered to bring another drink menu. No thanks: when in Rome and all that jazz.

After ordering a couple glasses of wine, Rand and I also ordered two appetizers: the Little Gems salad and the spare ribs. The salad was good, but I didn't love the dressing and I thought the blue cheese was used too sparingly. The ribs were good, literally sliding off the bone, but I thought the sauce was a bit too sweet? Also, I wanted them to be hotter.

For our entrees, we had the Ono (mine) and the Duck (his). My ono was cooked flawlessly. Kudos for that. I think, in fact, I chose the better dish. It all worked so well together, and that horseradish sauce was the perfect complement to the fish. Rand's duck was good (I'm not the biggest duck fan) and I liked the way the corn puree worked with the flavor of the duck. Still, it was just good. I thought the duck was a little chewy, but then, as I said, I'm not the biggest fan. The presentation of both dishes was quite attractive.

For dessert, we had the bittersweet chocolate souffle and the nectarine and summer berry crisp. The souffle was, of course, good, but I thought it needed a little something to cut the chocolate--creme fraiche or some berry. My crisp was good: the fruit was excellent, but the crisp lacked something--buttery goodness? It was a little to crunchy/nutty for my taste.

The wines we tried were also not the best, I fear. They were good. For example, I was surprised I liked the riesling (which is usually too sweet for me--this one wasn't). The viognier was not my favorite and I love viognier. I also tried the godello. Good but I wouldn't buy a bottle. Rand ended with the syrah which was my favorite of the night.

Finally, I thought the service was just a little too attentive. The restaurant wasn't so busy that we needed to be encouraged to wrap up our meal, but I felt that way. Don't get me wrong: everyone was professional and polite, offering suggestions, etc. I just felt the slightest bit of anxiety that they were going to take my plates and glasses the second after I finished. Personally, I fine with letting them sit a few minutes. Let them enjoy the empty feeling while I'm enjoying my full feeling.

I'll go back, but I would go to Nopa first.
Email Post
Labels: restaurants review