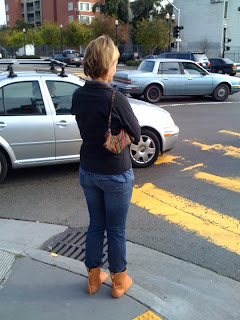 Dear Ladyperson waiting at the crosswalk,

I know it may be a difficult concept to comprehend, but the world does not bend to your whim. In fact, at some times and some places, you actually have to take action and participate in the world around you.

Take this intersection, for example. I'm sure you probably live in the area. Why else would you be a pedestrian here at 9 AM if you didn't. Surely you've noticed that the crosswalk signal doesn't activate unless you press the button. Surely you've noticed other people pressing said button. Surely you can see that the cars don't magically stop driving through this intersection as you approach. By the way, is your name Shirley?

And, in case you were wondering as I walked up and stood beside you this morning, yes, I assumed you had pressed the crosswalk button. And, yes, I was pissed when it became painfully obvious that you had not. And, yes, I hope it shamed you when it walked over and explicitly pressed this button so that I wouldn't have to waste any more time standing next to you.

So, in the future, Ms. Crosswalk Buttons Are So Beneath Me, just press the GD button or else I'm going to accidentally push you into oncoming traffic while reaching for the button.

missmagnoliathunderpussy said…
Todd darling, PUSH HER! She should be punished, if only for wearing that outfit in public or outside of Oakland.
March 14, 2009 at 3:23 AM