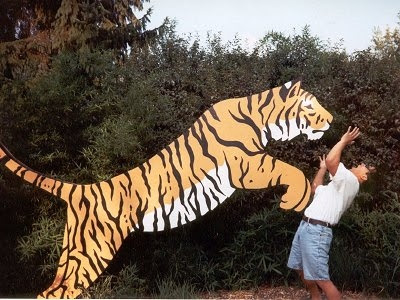 If you're going to the San Francisco zoo, my advice is "think again":

February 2001: A zoo employee is attacked and injured by the claws of a cassowary, a 5-foot-tall, 80-pound flightless bird native to the tropical forests of New Guinea and northeastern Australia.

November 1994: Two Patas monkeys escape from the Primate Discovery Center. The monkeys are about 15 inches high and weigh around 35 pounds.

May 1990: Veteran zookeeper Alan Feinberg is attacked and bitten by a 90-pound Persian leopard as a crowd of schoolchildren watches in horror. The keeper is treated for deep wounds to his head and neck.

February 1990: A keeper suffers a lower back fracture after being knocked into a 10-foot-deep moat by Tinkerbelle, a 7,000-pound elephant.

October 1988: Tinkerbelle attacks animal health technician Gail Hedberg, who was treating the elephant for an abscess on its cheek. The elephant knocks the technician down and does a headstand on her. Hedberg suffers a crushed pelvis.

July 1985: Two Patas monkeys escape from the zoo and remain at large for six weeks before being recaptured behind the University of California medical complex on Mount Sutro.

January 1979: A male Indian elephant injures keepers, knocking one into the moat.

November 1976: A 175-pound South American jaguar escapes from the zoo's animal hospital, where it was recovering from cracked footpads. Zoo director Saul Kitchener fells the animal, named Buster, with a dart from a tranquilizer gun

February 1976: An antelope leaps over a damaged fence and knocks a visitor to the ground, causing head injuries.

March 1972: A 3-year-old girl suffers a broken jaw and deep facial cuts when a camel leans over a fence and bites the child in the face. It drags her over the fence and tramples her.

March 1971: A 300-pound female tapir escapes from her compound and is found wandering on Sloat Boulevard. The tapir bounds over two police cars, denting both, and then knocks a police officer to the ground.

April 1968: Amos Watson, a visitor, is mauled by a 450-pound lion, suffering puncture wounds over most of his body. Watson had climbed over a rail and tumbled into the moat. The lion is killed by one shot from a keeper's rifle.

August 1967: Zookeeper Robert Caldwell is badly bitten by a 400-pound orangutan. He was alone near the Great Ape Grotto when Big Red, the male orangutan, reached under the mesh-covered bars and grabbed Caldwell's left arm, pulling it into the cage. Then Linda, a female orangutan, chewed on the keeper's arm.

December 1960: A 500-pound lion reaches between the bars of its cage and hooks the arm of a keeper, who has to undergo two hours of surgery for his injuries.

May 1960: A 125-pound black leopard attacks a keeper who had been feeding the animal.

March 1949: A polar bear reaches through the bars of its cage and hooks a visitor's arm.
Email Post
Labels: san francisco zoo when animals attack