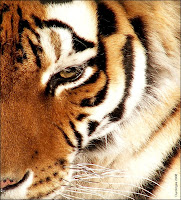 (12-25) 18:34 PST San Francisco - -- One San Francisco Zoo visitor was killed and two others injured early this evening after a tiger escaped from its cage.

The tiger that got loose was fatally shot while it was attacking a patron, said San Francisco Fire Department spokesman Lt. Ken Smith.

The attack happened shortly after the zoo's 5 p.m. closing time at a cafe on the east end of the zoo, officials said. The tiger cages are located near the center of the zoo.

The condition of the two injured patrons was not immediately known. It was also not clear how the tiger escaped.

missmagnoliathunderpussy said…
Well darling I blame Herbert Hoover and the Republicans!
December 26, 2007 at 1:26 AM

Unknown said…
Let me get all vegantastic for a minute and say that wild animals should be left in the wild, and we should preserve the wild instead of paving over it.

People should satisfy their curiosity about wild animals through nature documentaries, not through putting beautiful and magnificent creatures in cages for the yokels to gawk at.