Mike Huckabee on Pakistan (I mean Mexico, I mean Pakistan) 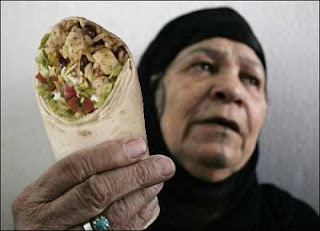 DOES Mike Huckabee know where Pakistan is on the globe? Is everything just "south of the border" for Mike? Do I see a whole new market for "Benazir Burritos"?

I seriously could not make this stuff up.

Story in the NYTimes

DES MOINES — Mike Huckabee used the volatile situation in Pakistan Friday to make an argument for building a fence on the American border with Mexico and found himself trying to explain a series of remarks about Pakistanis and their nation.

On Thursday night he told reporters in Orlando, Fla.: “We ought to have an immediate, very clear monitoring of our borders and particularly to make sure if there’s any unusual activity of Pakistanis coming into the country.”

On Friday, in Pella, Iowa, he expanded on those remarks.

“When I say single them out I am making the observation that we have more Pakistani illegals coming across our border than all other nationalities except those immediately south of the border,” he told reporters in Pella. “And in light of what is happening in Pakistan it ought to give us pause as to why are so many illegals coming across these borders.”

In fact, far more illegal immigrants come from the Philippines, Korea, China and Vietnam, according to recent estimates from the Department of Homeland Security.

Asked how a border fence would help keep out Pakistani immigrants, Mr. Huckabee argued that airplane security was already strong, but that security at the southern United States border was dangerously weak.

“The fact is that the immigration issue is not so much about people coming to pick lettuce or make beds, it’s about someone coming with a shoulder-fired missile,” he said.
Email Post
Labels: good fences make good neighbors mexico mike huckabee pakistan