Allergic to the Internet? 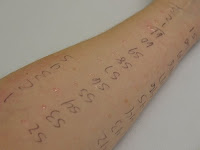 A group of Santa Fe residents is taking the city to task over WiFi Internet systems installed in public buildings.

Why? They claim they’re allergic to the wireless signal. They say the city is violating the ADA by limiting their access to those buildings.

ADA cases involving sensitivity to perfume and other chemicals have made it to court with varying results, but so far, no court has ever ruled on whether so-called “electro-sensitivity” can be considered a disability under the law.

Experts say it’s unlikely for a company to be sued by an employee over this issue, but stranger things have certainly happened. If electro-sensitivity ever gets legal protection, employers would be in big trouble, since many workplaces run their own WiFi networks.

This gives me an idea. I think I'm allergic to homeless people, smokers, people who walk on the wrong side of the sidewalk, skateboarders, pretentious Marina people, self-absorbed Mission hipsters, and Republicans. Can I sue someone?
Email Post
Labels: allergies

Sue Doe-Nim said…
You can if you want but I'm a pretentious Republican who can hire a lawyer who'll kick your lawyer's ass.

Bunch of f*ing sissies I say.... remember the people who didn't like perfume and said they were "allergic".