Now You Know Why They Call It The Singapore Sling

The Singapore men raised eyebrows at the Asian Games in China with the moon on groin design.

Their government said they should show ‘dignity’ to the flag.

A statement from the country’s Information Ministry declared: ‘Unfortunately the team did not seek our advice on the use of the crescent moon and stars when they designed their swim trunks. 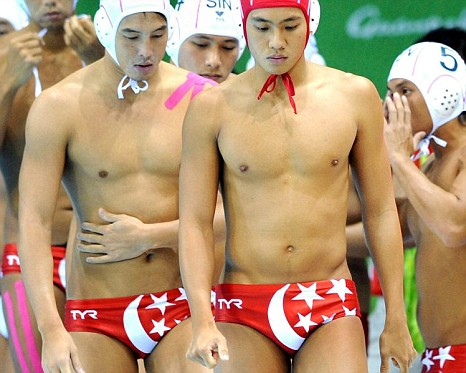 The Singapore government said the design was 'inappropriate' (AFP/Getty)

‘We would have told them that their design is inappropriate as we want elements of the flag to be treated with dignity.’

The rules of the Asian Games stipulate a team's uniform cannot be changed in the middle of the tournament, so the Singapore government will have to allow the water polo players wear the controversial trunks for the rest of the competition.

The team has apologised for the placement of the flag and confirmed the trunks would not be used again after the Games.

‘We didn't have the slightest intention to do anything funny on our trunks to insult Singapore,’ team manager Samuel Wong told the Straits Times.

Posted via email from toddx's posterous

ASSHOLE BOYFRIEND said…
Thank you Heathan God of Evolution for bringing me Asian eye candy of dicks and stuff by chance.
December 3, 2010 at 7:22 PM