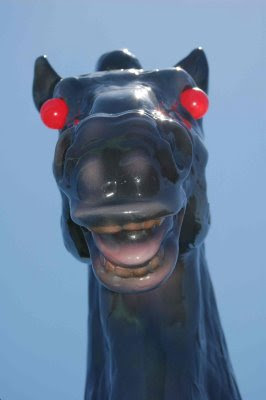 A 78-year-old Roseville man died early this morning after being knocked down at Candlestick Park by a runaway San Francisco police horse Friday evening, police said.

Eugene Caldwell was knocked down by the runaway horse just before 6 p.m. in the charter bus parking lot, according to police. He hit his head, suffering critical injuries, and died about 1 a.m. at San Francisco General Hospital.

The officer riding the horse was thrown after a plastic bag blew up and got caught in the animal's bridle. The horse then bolted across the parking lot, knocking down another person. The officer and other person knocked down were treated at the scene for minor injuries, said police Sgt. Neville Gittens.

The best reader's comment on the story on SFGate.com had to be, "I thought they banned plastic bags in San Francisco?"