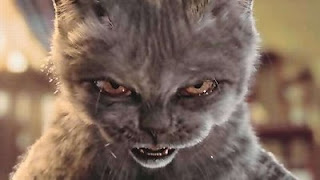 What do you get when you cross irresponsibility with complete disregard for all social conventions? If you live in a trailer in Temecula, CA, you get more than 100 feral cats and dogs living among the remains of hundreds of other dead animals that had been dumped in trash bags. Not a pretty sight.

Temecula police on Friday arrested a 67-year-old man on suspicion of animal cruelty after officers responded to a call that two vicious dogs were running loose at his address in Riverside County.

The man had let animals be fruitful and multiply over and over again, and the animals had completely taken over his mobile home. Considering the nationwide mortgage crisis, police and housing officials could not sit idly by and let these squatters go unpunished. All but nine puppies and one dog were euthanized.

"The smell, I can't tell you how bad the smell was," said Willa Bagwell, Calvin Klein fragrance consultant and executive director of Animal Friends of the Valleys, which provides animal control services for Temecula.

PETA spokesperson Rain Santangelo issued the following statement, "This tragedy of genocidal proportions will not go unnoticed. While I would normally promote spaying and neutering of all domestic pets, today I want to encourage all mobile home dwellers to forego this practice as a way to show solidarity with our fallen feral friends today. Their memory and stench will live on."

Anonymous said…
How do animals become feral when fed by man? Give me a break...PleAse do not play us stupid...How much did tax payers pay on this stupidity? And we call ourselves man?
June 27, 2009 at 11:20 AM