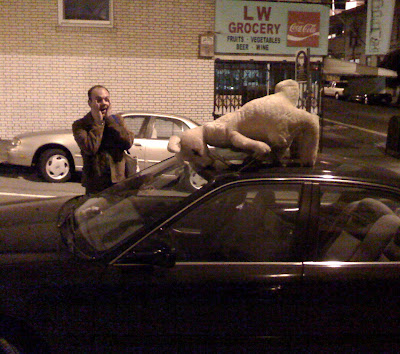 It was the corner of Washington and Leavenworth on Sunday night. The carnage was horrific. The emotional toll this scene wreaked upon us (see Clark) was unbearable, and the psychic scars will be with us for years to come.

Why?! Why did you do it? What did the little Roo do to you? On this night of Golden Globe-dom, couldn't you just revel in the red carpet, the hairdos (and DON'Ts--see Drew Barrymore), the jewelry, the speeches, the Spielberg montage. No. Instead, you sought out this poor little creature. You hunted him, stalking him through Chinatown and Nob Hill. You waited until he hopped to this corner to watch the cable car go by, then you did it. You ended his stuffed little life, and you tied him to the top of this car for the whole city to see.

The funny thing is that within minutes of taking this photo, the kangaroo was gone. Rand thought this group of people walking by the car had moved it, but I'm not so sure. I think this Roo was like Lazarus. He got up all by himself. And, if you're lucky, you'll see him hopping around the Castro or Pac Heights or panhandling in Union Square. Be nice. Put a dollar in his pouch.
Email Post
Labels: they shoot kangas don't they