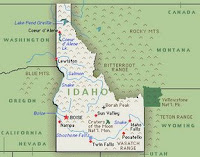 In a startlingly bold political move, state lawmakers in Idaho announced today that they will retroactively hold their state primaries as of yesterday. When asked why, party chairman, Len Woolsbury said, "We believe the people of the United States of America deserve to hear what the citizens of Boise think. We have mountains, we have lakes, we have cows, and by god, we have opinions!"

In other news, Wyoming officials announced that Yellowstone Park will no longer honor the 30 year agreement with Idaho that allows bartering for park entry. "We have enough bedazzled tobacco purses and hunting knife sheaths to last us until 2040. Thanks but no thanks."