A Message from Barbara Boxer 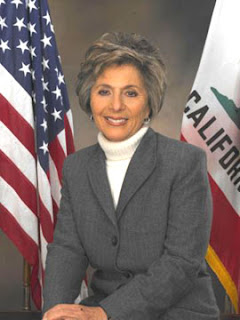 To my fellow Californians: I think this is very important. We simply cannot allow this administration's agenda to play out anymore. It's time to draw the line. --Todd

Just when you thought it was safe to start thinking about having a Democrat in the White House, along comes a cynical power grab by Republican operatives. And unfortunately, it's happening right here in my own state of California.

If you haven't heard already, Republican strategists recently announced plans to begin raising money for a dangerous initiative that would radically change the way California apportions our electoral votes in presidential elections. Rather than awarding all of California's electoral votes to the candidate that wins the popular vote -- the way it works in every single state except the small states of Maine and Nebraska -- their scheme would divvy up California's electoral votes based on the number of Congressional districts each candidate wins.

Don't get me wrong: After the 2000 and 2004 election debacles, I'm a strong advocate for election reform. But it's absolutely wrong for California to go it alone. It's just patently unfair for a large "blue" state like California to change our system for awarding electoral votes while other large states which trend "red" like Texas and Florida don't change their system at the same time.

This isn't reform -- this is a partisan power grab by Republican operatives in the Karl Rove tradition.

The initiative's sponsors claim that their plan will make the presidential candidates spend more time campaigning in California. That's nonsense. Their scheme won't make candidates come to California during a general election any more than they do now -- which is rarely, and only to raise money.

Just look at the 2006 election. In 2006, only 2 of California's 53 Congressional districts were truly in play. In the remaining 51 districts, the margin of victory for the winning Republican or Democratic House candidate was always more than 6% -- and in most cases, the difference was 20 or 30 percentage points or more. The number of competitive districts in the 2008 election will not be much different than what we saw in 2006 -- so apportioning our electoral votes based on the winner of each Congressional district would clearly do nothing to bring the presidential candidates to California more often.

If America wants real election reform -- and I know I do -- we need to elect our President directly by the national popular vote, plain and simple. Then the candidate who receives the most votes in all 50 states and the District of Columbia would be elected President. That's the fair thing to do.

If you're interested in joining the fight against this power grab by Republican operatives, I hope you'll check out www.FairElectionReform.com. You don't have to live in California to get involved, because by skewing the results of the 2008 presidential election, this initiative clearly will affect all Americans.

Please join me in fighting for real, fair election reform -- and rejecting this cynical partisan power grab.
Email Post
Labels: blue state forever My B.S. is from the Electoral College republicans are the devil