It Puts the "No" in North Korea 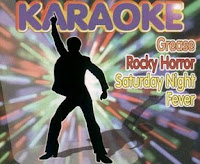 In an effort to stem the tide of evil foreign influences, North Korea has shut down all its karaoke bars. Both of them. (I joke.) The Ministry of Mind Control and Magic stated that this was a "mopping-up operation to prevent the ideological and cultural permeation of anti-socialism." I feel safer already.

Actually, you may not know this, but Tiananmen Square was actually the largest karaoke bar in the world. Its revolutionary forces caused all sorts of trouble for China and its tanks. We simply cannot underestimate the power of drunken, tone deaf caterwauling.

In other news, the San Francisco Board of Supervisors has boldly voted to censure Kim Jong-il for his recent album, PyongYingYang: Kickin' It Britney-Style in the DMZ for its use of too little post-consumer plastic in the production of his CDs. Supervisor Ed Jew stated, "We must hold ourselves and the world to a higher standard when it comes to recycling and global warming. Without taking a stand today, our homes in Burlingame could be submerged by rising sea levels in the next 20 years. We simply will not sit still and let this travesty of justice occur."
Email Post
Labels: politics world news