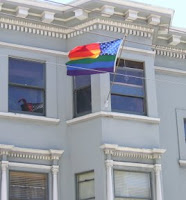 San Francisco had an amazing Fourth of July this year. The weather was phenomenal; the skies were clear. R and I decided to have lunch in the park, so we got some sausages at Rosamunde's. After a short walk, we ended up near Steiner and Waller and set up camp. The sausages were great. I had the beer sausage with grilled onions and sweet peppers and a root beer. Sitting on the grass with the sun shining down and eating yummy sausage is just about perfect. After lunch, we headed over to Peet's on Market St. for some iced tea (um, have you noticed the title of this blog?). I got a few shots of the great SF weather from the vantage of the beginning of the Castro. The streetcars were out in abundance, and the tea was thirst-quenching. 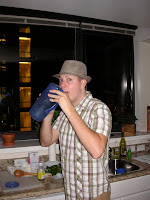 Later in the day, after much debate on what to do and where to do it, we decided just to have people come over to R's place and watch the fireworks from there. The view was limited, but we were inside and comfortable. We also had drinks, taquitos, drinks, and music--both recorded and live. The best part of the evening was probably R's performance of his song "I wish your boyfriend was dead." (I may have a video to post, but the quality is terrible. [EDIT] NEVERMIND. IT WON'T BE POSTED.) We also had a small collaborative effort on a new song. Apple's "GarageBand" made for some fun recording. We stayed up until about 3am, then everyone headed out. Between the mojitos, maitais, friends, fireworks, and music, I think a good time was had by all. Until next year.