Cutting Off Her Nose to Spite Her Face: Amy Winehouse 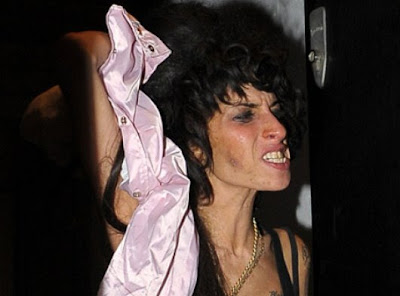 Amy Winehouse's persistent drug use has left the troubled star's nose so "weak" she is concerned that it's about to fall off, according to a new report.

"Amy knows that her nose is next to fall apart — she admitted to me that it feels weak at the bone," a source tells Fox News columnist Neil Sean.

Amy herself has addressed the nose issue. "Yeah, it's a problem, but it's my problem so leave it," Sean quotes her as saying.

Meanwhile, Amy's friends are said to be so worried about the Grammy Award winner they are keeping watch over her 24/7.

Now, I don't know about the rest of you red-blooded American males, but when I see a hot Brit like this strolling down the street, things definitely get a little hazy. This is sexy, people. Have no doubt. S.E.X.Y.
Email Post
Labels: celebutards excuse me while I vomit

Anonymous said…
I think Ernie put it very well a few months back:

missmagnoliathunderpussy said…
Darling perhaps she should call Michael Jackson I believe her nose fell of several years ago as well.
October 6, 2008 at 3:55 PM